I really have a love/heat relationship with our insurance provider. We have private insurance through my husband’s employer and trust me, without it, we’d be well over $750K in debt. So in many ways, I am so thankful for it but it’s not free. With premiums, deductibles, and maximum out of pocket, we’re drowning. So when we get the dreaded package in the mail, informing us that “This claim is denied. After our review it has been determined this procedure was not medically necessary.” – It takes the wind out of our sails.

Last month, Jackson needed tubes put in his ears. This is a very basic and common procedure that literally takes 15 minutes. Not a big deal, right? Well for someone who has Congenital Hyperinsulinism, it’s not that simple. The procedure requires general anesthesia (being put to sleep), which requires the patient to fast (not eat) starting at midnight before the procedure. There lies the problem. Individuals with HI, typically, can not fast for long periods of time. The nature of their disease requires carbs because they are constantly hypoglycemic. Jackson needs to eat every 2.5 – 3 hours, even over night. 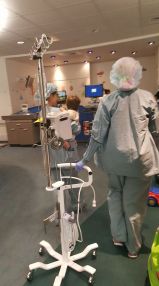 Working with the Texas Children’s Hospital ENT and Endo departments – Jackson was admitted to TCH the night before the procedure. He ate a nice healthy dinner and then was put on a dextrose (sugar) drip. His blood sugar remained stable and for the first time in his life, he slept for nearly eight hours straight! He was stable enough for surgery and everything went off without a hitch.  We were discharged within 45 minutes of the surgery. The stay and surgery were a success!

This week, the dreaded thick envelope arrived from the insurance company and we now know that means it’s an EOB (explanation of benefits) along with an appeals package. Each time that thick envelope arrives, we know something else has been denied. I have appealed before and it’s not that I “can’t” do it. It’s that I shouldn’t have to fight with them when they have access to all of his medical records. It’s exhausting sending the same information, time and time again but I will, and the new fight begins and the fear of assuming $4,000 of additional debt hangs over our heads.